On the Merits of Unnaturalness 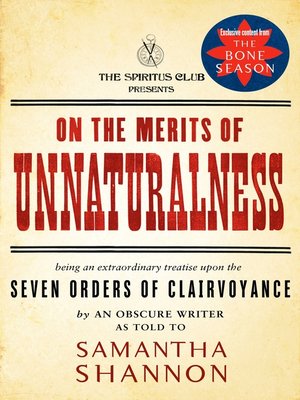 View more libraries...
Be aware, my good Reader, that this Pamphlet, no matter how controversial its content, must never fall into enemy Hands.

The most important piece of clairvoyant literature written in the twenty-first century, On the Merits of Unnaturalness is a pamphlet first published anonymously in 2031 by Jaxon Hall, the voyant who would later become the mime-lord known as the White Binder.
Hall was the first to index both known and supposed forms of Unnaturalness, resulting in the classification of the Seven Orders. This controversial piece of literature spread across the voyant underworld like a plague, revolutionising the syndicate but also creating discord in the form of brutal gang wars between the newly divided categories, the scars of which can still be seen today.
Revelatory and subversive, On the Merits of Unnaturalness is a must-read for any reader with a desire to further immerse themselves in the incredible world of Samantha Shannon's The Bone Season.