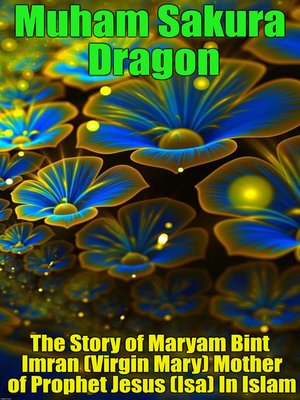 Lady Maryam Bint Imran or Virgin Mary (Arabic: مريم‎ Maryām), the mother of Jesus (Isa), is considered one of the most righteous women in the Islamic religion. She is mentioned more in the Quran than in the entire New Testament and is also the only woman mentioned by name in the Quran. According to the Quran, Prophet Jesus (Isa) was born miraculously by the will of God without a father. His mother is regarded as a chaste and virtuous woman and is said to have been a virgin. The Quran states clearly that Jesus was the result of a virgin birth, but that neither Mary nor her son were divine. In the Quran, no other woman is given more attention than Mary and the Quran states that Mary was chosen above all women:

The nineteenth chapter of the Quran, Maryam (sura) is named after her and is, to some extent, about her life. Of the Quran's 114 suras, she is among only eight people who have a chapter named after them. Mary is specifically mentioned in the Quran, alongside Asiya, as an exemplar for all righteous women. Mary plays an important role in Islamic culture and religious tradition, and verses from the Quran relating to Mary are frequently inscribed on the mihrab of various mosques, including in the Hagia Sophia.

Mary is one of the most honored figures in Muslim history, with the majority of Muslims viewing her as one of the most righteous women to have lived, and a minority viewing her as an actual female prophet. Muslim women look upon her as an example and are known to visit both Muslim and Christian shrines. Muslim tradition, like Christian, honors her memory at Matariyyah near Cairo, and in Jerusalem. Muslims also visit the Bath of Mary in Jerusalem, where Muslim tradition recounts Mary once bathed, and this location was visited at times by women, who were seeking a cure for barrenness. Some plants have also been named after Mary, such as Maryammiah, which, as tradition recounts, acquired its sweet scent when Mary wiped her forehead with its leaves. Another plant is Kaff Maryam (Anastatica), which was used by some Muslim women to help in pregnancy, and the water of this plant was given to women to drink while praying.

The Story of Maryam Bint Imran (Virgin Mary) Mother of Prophet Jesus (Isa) In Islam
Copy and paste the code into your website.
New here? Learn how to read digital books for free