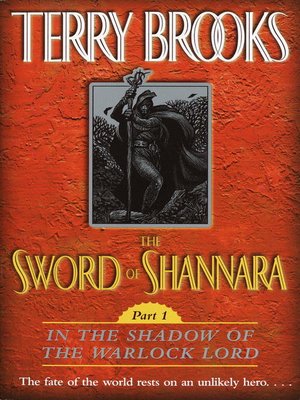 The Sword of Shannara, Part 1: In the Shadow of the Warlock Lord

Tucked away in peaceful Shady Vale, the young half-elf Shea Ohmsford gives little thought to the outside world. Yet far to the north, the evil Warlock Lord has dispatched shadowy Skull Bearers, creatures twisted by dark sorcery, to hunt him down. At the same time, a black-cloaked giant of a man appears in Shady Vale. He claims to be the mysterious Druid known as Allanon, a wizardly wanderer of vast knowledge and power--and he has come to see Shea. For Shea, he says, is the last descendant of an ancient Elven king. Only he, in all the world, can wield the fabled Sword of Shannara. And only the Sword can stop the Warlock Lord from destroying all that lives.

The Sword lies far from Shady Vale, in the Druid castle of Paranor. And Paranor has fallen under the shadow of the Warlock Lord. Yet all is not lost. Shea will rise to the challenge. Together with Allanon and a handful of brave companions, he begins a desperate quest into the very heart of evil. . . .

More about Terry Brooks
The Sword of Shannara, Part 1: In the Shadow of the Warlock Lord
Copy and paste the code into your website.
New here? Learn how to read digital books for free