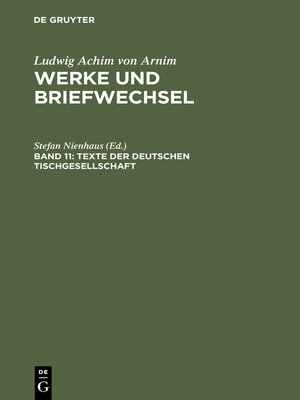 This volume is the first to assemble all the documents of the Deutsche Tischgesellschaft, founded on 18 January 1811 by L. Achim von Arnim with support from Adam Müller. They are the most significant testimonies to the culture-political claims and concerns of a type of Berlin Romanticism displaying nationalist/anti-French and anti-Semitic leanings. Alongside important patriotic songs and satirical after-dinner speeches by Arnim, they contain such items as Brentano's satire The Philistine before, in, and after History and various contributions by Fichte (chairman of the society from mid 1811) to the more convivial side of the meetings.

Texte der deutschen Tischgesellschaft
Copy and paste the code into your website.
New here? Learn how to read digital books for free