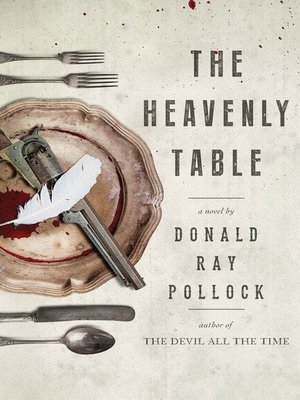 FictionLiteratureSuspenseThriller
From Donald Ray Pollock, author of the highly acclaimed The Devil All the Time and Knockemstiff, comes a dark, gritty, electrifying (and, disturbingly, weirdly funny) new novel that will solidify his place among the best contemporary American authors.
It is 1917, in that sliver of border land that divides Georgia from Alabama. Dispossessed farmer Pearl Jewett ekes out a hardscrabble existence with his three young sons: Cane (the eldest; handsome; intelligent); Cob (short; heavy set; a bit slow); and Chimney (the youngest; thin; ill-tempered). Several hundred miles away in southern Ohio, a farmer by the name of Ellsworth Fiddler lives with his son, Eddie, and his wife, Eula. After Ellsworth is swindled out of his family's entire fortune, his life is put on a surprising, unforgettable, and violent trajectory that will directly lead him to cross paths with the Jewetts. No good can come of it. Or can it?
In the gothic tradition of Flannery O'Connor and Cormac McCarthy with a healthy dose of cinematic violence reminiscent of Sam Peckinpah, Quentin Tarantino and the Coen Brothers, the Jewetts and the Fiddlers will find their lives colliding in increasingly dark and horrific ways, placing Donald Ray Pollock firmly in the company of the genre's literary masters.
FictionLiteratureSuspenseThriller

DONALD RAY POLLOCK is the author of the novel The Devil All the Time and the story collection Knockemstiff, recipient of the 2009 PEN/Robert W. Bingham Fellowship. He worked as a laborer at the Mead Paper Mill in Chillicothe, Ohio, from 1973 to 20...

More about Donald Ray Pollock
The Heavenly Table
Copy and paste the code into your website.
New here? Learn how to read digital books for free