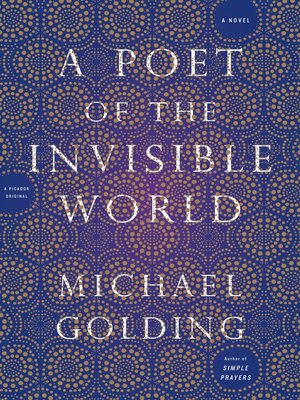 A Poet of the Invisible World

FictionLiteratureHistorical Fiction
In the tradition of Siddhartha by Hermann Hesse comes a new spiritual novel that is a stunning feat of storytelling and imagination. A Poet of the Invisible World follows a boy named Nouri, born in thirteenth-century Persia, with four ears instead of two. Orphaned as an infant, he's taken into a Sufi order, where he meets an assortment of dervishes and is placed upon a path toward spiritual awakening. As he stumbles from one painful experience to the next, he grows into manhood. Each trial he endures shatters another obstacle within—and leads Nouri on toward transcendence.
FictionLiteratureHistorical Fiction

Michael Golding was born in Philadelphia and educated at Duke, Oxford, and the University of California at Irvine, where he received the Gellman Founder's Award. He began his career as an actor, appearing in numerous Off-Broadway shows.His first n...

More about Michael Golding
A Poet of the Invisible World
Copy and paste the code into your website.
New here? Learn how to read digital books for free