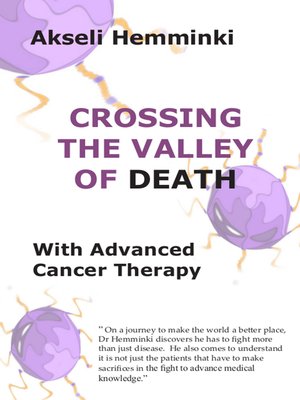 Crossing the Valley of Death with Advanced Cancer Therapy

Health & FitnessNonfiction
The Valley of Death, the gap between research and clinical practices, is hard to bridge. It becomes impassable when the supervisory medical authority claims that advanced therapies are illegal to use as treatment in patients with incurable cancer.Ever wonder why so few cancer research "breakthroughs" reported by the media lead to new treatments? Why are new cancer drugs so expensive? Why are basic researchers seen as doing heroic work for humanity, while the pharmaceutical industry is viewed as greedy and lacking morals? Why are drugs so tightly regulated, while "natural products" are not controlled at all, even though safety and efficacy are known only for the former? Are scientific discoveries being smothered to death by over-regulation, at the expense of patients in need of new therapies?Experimental therapies can strike controversy, but they are becoming increasingly common as the gap between routine treatments and clinical trials becomes wider. Progress in science has identified an increasing number of interventions that might be useful for patients suffering from currently incurable cancer, neurological and metabolic diseases or infections such as Ebola. In his book Dr Hemminki explains the differences between treatments and trials, and why both are necessary to optimally harness progress in science into benefits for patients.Akseli Hemminki, MD, PhD, has more than 2 decades of experience in translational cancer research and is now a professor of oncology at the University of Helsinki in Finland and father of 3 children. He has authored more than 200 scientific papers, founded 2 biotechnology companies and been involved in a dozen clinical trials."On a journey to make the world a better place, Dr Hemminki discovers he has to fight more than just disease. He also comes to understand it is not just the patients that have to make sacrifices in the fight to advance medical knowledge. "
Health & FitnessNonfiction

Akseli Hemminki, MD, PhD started studying cancer genetics in his second year of medical school at the age of 20. Following graduation, he moved to the US to learn about cancer gene therapy with oncolytic viruses, and then returned to Finland to sp...

More about Akseli Hemminki
Crossing the Valley of Death with Advanced Cancer Therapy
Copy and paste the code into your website.
New here? Learn how to read digital books for free