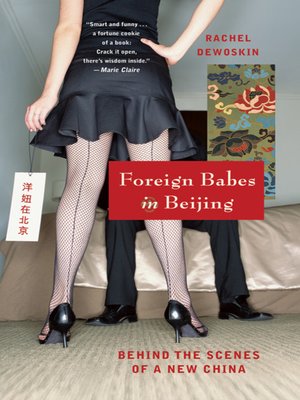 Behind the Scenes of a New China

"For a real insider's look at life in modern China, readers should turn to Rachel DeWoskin."—Sophie Beach, The EconomistDetermined to broaden her cultural horizons and live a "fiery" life, twenty-one-year-old Rachel DeWoskin hops on a plane to Beijing to work for an American PR firm based in the busy capital. Before she knows it, she is not just exploring Chinese culture but also creating it as the sexy, aggressive, fearless Jiexi, the starring femme fatale in a wildly successful Chinese soap opera. Experiencing the cultural clashes in real life while performing a fictional version onscreen, DeWoskin forms a group of friends with whom she witnesses the vast changes sweeping through China as the country pursues the new maxim, "to get rich is glorious." In only a few years, China's capital is transformed. With "considerable cultural and linguistic resources" (The New Yorker), DeWoskin captures Beijing at this pivotal juncture in her "intelligent, funny memoir" (People), and "readers will feel lucky to have sharp-eyed, yet sisterly, DeWoskin sitting in the driver's seat"(Elle).

Rachel DeWoskin was a soap-opera star and a consultant in Beijing for five years. She now divides her time between New York City and Beijing, teaches poetry, and writes Chinese rap.

More about Rachel DeWoskin
Foreign Babes in Beijing
Copy and paste the code into your website.
New here? Learn how to read digital books for free