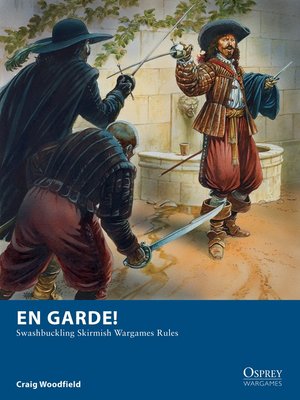 GamesHistoryNonfiction
En Garde! is a small-scale skirmish game based on the successful Ronin rules, in which small groups of warriors fight each other for honour or riches. Rather than just rolling a few dice, the rules allow players to make tactical decisions about how the models that they control will fight – offensively, defensively, or by applying special skills and abilities. En Garde! covers the conflicts of the 16th, 17th and early 18th centuries, when black-powder weapons started to become common in battle but martial prowess still determined the outcome. Play as Border Reivers, Conquistadors, Landsknechts, Aztecs, French Musketeers, Caribbean Pirates and many more, in scenarios that evoke classic engagements of the genre. Simple campaign rules allow multiple scenarios to be played in sequence and permit warbands to develop over time. An appendix is also included to provide brief rules for supernatural creatures of the period – monsters, demons, revenants and witches – and new abilities and equipment to fight them, making En Garde! the perfect ruleset for gamers who want something a bit different from the norm.
GamesHistoryNonfiction

Craig Woodfield is a defence analyst from Canberra, Australia, and has previously written for magazines such as Slingshot and Wargames, Soldiers and Strategy. He is the author of the Ronin and En Garde! skirmish rules in the Osprey Wargames series...

More about Craig Woodfield
En Garde!
Copy and paste the code into your website.
New here? Learn how to read digital books for free