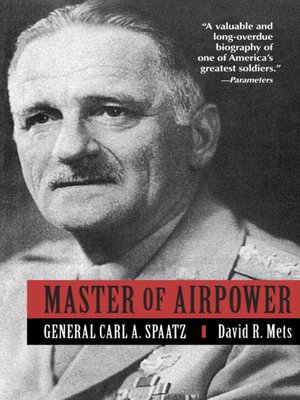 Biography & AutobiographyHistoryMilitaryNonfiction
"A valuable and long-overdue biography of one of America's greatest soldiers."—Parameters

The story of Gen. Carl "Tooey" Spaatz's life is more than a biography of one of America's great military leaders. It is a history of the development of airpower, and a fascinating, inside look at the long, difficult struggle to win autonomy for the U.S. Air Force. Spaatz earned his wings in 1918, when flying was a new and dangerous occupation; aviation school mortality rates were 18 percent. After gaining experience as a fighter pilot during the "Great War," he became one of the Air Corps' top pursuit commanders during the 1920s. During the 1930s, he moved over to bombers just as modern, long range aircraft were coming into service. As a senior bomber commander, Spaatz significantly influenced the emerging strategic bomber doctrine. By the time of the outbreak of the Second World War, Spaatz was one of America's most experienced aviators.
He was at the helm of the evolution of the new American military "strategic airpower" doctrine, which proved to be a decisive factor in World War II. After the Allied victory, planning and launching an independent Air Force would occupy Spaatz for the remainder of his career.

Today's Air Force bears his indelible stamp. "Tooey" Spaatz was a low-profile leader who was known for his open mind and pragmatic approach, and who was influential in a quiet, forceful way. Possessed of absolute integrity, even when his beliefs were unpopular, he pressed them at the risk of his career.
Biography & AutobiographyHistoryMilitaryNonfiction

Master of Airpower
Copy and paste the code into your website.
New here? Learn how to read digital books for free