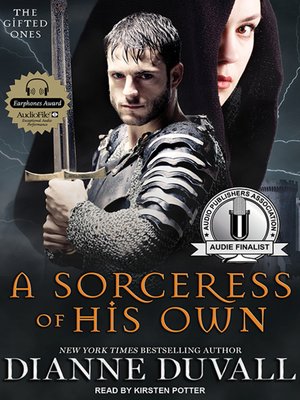 A Sorceress of His Own

FantasyFictionLiteratureRomance
Since the day Lord Dillon earned his spurs, rumors of his savagery on the battlefield have preceded him into every room, stilling tongues and sparking fear. Weary of battle, he wishes only to find a woman he can wed who will approach him not with fear, but with the tenderness that has been absent from his life for so long. Yet only the wisewoman seems invariably at ease in his presence. For seven years, Alyssa has been by Lord Dillon's side-counseling him from the shadows, healing him, and staving off the worst of his loneliness. Blessed-or cursed-with gifts that label her a sorceress, she is forced to conceal her youth and the love she harbors for him, leading Dillon and his people to believe she is the same wisewoman who served his father. All is revealed, however, and passions flare when an enemy threatens Dillon's life and Alyssa sacrifices everything to save him. When Dillon discovers that the wisewoman is far from elderly, he is instantly entranced. And, as he and Alyssa work together to defeat an enemy bent on destroying them both, Dillon will risk anything-even the wrath of his king-to be with her.
FantasyFictionLiteratureRomance

Dianne Duvall is the New York Times and USA Today bestselling author of the Immortal Guardians and The Gifted Ones series. Her books have twice been nominated for RT Reviewers' Choice Awards and have been called "fast-paced and humorous" (Publishe...

More about Dianne Duvall
A Sorceress of His Own
Copy and paste the code into your website.
New here? Learn how to read digital books for free