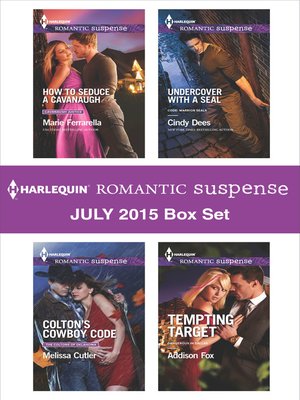 Looking for heart-racing romance and breathless suspense? Want stories filled with life-and-death situations that cause sparks to fly between adventurous, strong women and brave, powerful men?

Harlequin® Romantic Suspense brings you all that and more with four new full-length titles for one great price every month!

HOW TO SEDUCE A CAVANAUGH
Cavanaugh Justice
by USA TODAY bestselling author Marie Ferrarella
Kelly Cavanaugh and Kane Durant could barely be friends, much less partners, and never in a million years lovers. But while working together to solve a series of seemingly random home invasions, whatever chill existed between them transforms into a sizzling passion...

COLTON'S COWBOY CODE
The Coltons of Oklahoma
by Melissa Cutler
Pregnant and desperate, Hannah Grayson never expects to face the baby's father at a job interview! Cowboy Brett Colton gives her the position and vows to protect her and their unborn baby, but when long-buried secrets turn deadly, no one on the ranch is safe.

UNDERCOVER WITH A SEAL
Code: Warrior SEALs
by New York Times bestselling author Cindy Dees
Eve Hankova demanded answers from the Russian mob about her missing brother, thereby adding herself to their list of enemies. Her only shot at answers--and survival--lies with her reluctant rescuer, a burned-out and far-too-appealing navy SEAL.

TEMPTING TARGET
Dangerous in Dallas
by Addison Fox
After priceless jewels are discovered in the floor of a prominent Dallas bridal boutique, a detective and the alluring wedding caterer he's protecting race to find the villain plotting to recover the gems...and perhaps they'll give in to a simmering attraction, which might necessitate a walk down the aisle!