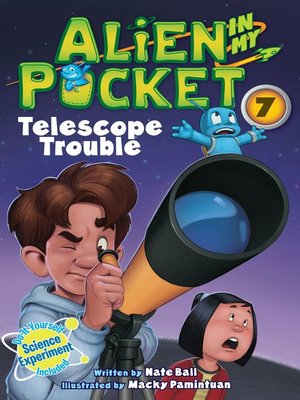 Alien in My Pocket #7

Telescope Troubles · Alien in My Pocket

It's Zack and Amp to the rescue in the seventh book in Nate Ball's beloved Alien in My Pocket series! With a tale that's sure to tickle the funny bone and a do-it-yourself hover-ship science experiment, it's an adventure readers are sure to enjoy.

Life has been no picnic since Amp crash-landed his spaceship through Zack McGee's window. But when Amp takes up stargazing, he makes a huge discovery that will take their zany adventures to the next level. It appears that the Erdian aliens are at it again! The alien invasion of Earth is in progress, and it's up to Zack, Amp, and Olivia to leap into action. But this time it'll take more than a little gadgetry and a few white lies to get Amp out of trouble and to save the world!

Like every book in the Alien in My Pocket series, Telescope Troubles mixes Common Core–aligned science and safe, hands-on experiments with a hilarious story that young readers will love. Publishers Weekly said of Alien in My Pocket: Blast Off!: "With its screwball comedy and lively dialogue, the novel gives readers the opportunity to laugh as they learn."

Nate Ball is the host of the Emmy and Peabody award-winning PBS reality shows Design Squad and Design Squad Nation. An MIT graduate with a master's in mechanical engineering, Nate is also the cofounder of Atlas Devices, a two-time All-American pol...

More about Nate Ball
Alien in My Pocket #7
Copy and paste the code into your website.
New here? Learn how to read digital books for free