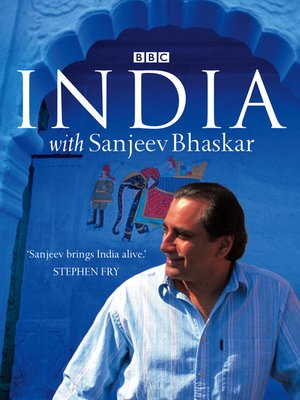 Sanjeev Bhaskar, comedian and writer behind 'The Kumars at No. 42' embarks on an epic and highly personal journey through modern India. Sanjeev's characteristic humour and unique take on the country form the heart of this beautifully written travel book that became a Sunday Times bestseller in hardback when it accompanied his BBC series.

Sanjeev Bhaskar, comedian and writer of 'The Kumars at No. 42' and 'Goodness Gracious Me' embarks on an epic and uniquely personal journey through the heart of India for his latest BBC2 series, unveiling a country of contradictions and surprises, where ancient and modern collide, and millionaires and beggars live cheek by jowl.

As a young British Asian growing up in 1970s west London above his parents' launderette, Sanjeev was fed stories of exotic old India – of cobras and leopards, trapping fireflie and riding in rickshaws. But family visits to the old country revealed stifling heat, mosquitos, powercuts, and the pervasive aroma of cow dung – baffling to a young boy brought up in an England of fish and chips and light drizzle.

Now we follow Sanjeev on his adventures through India, where he is reunited with old relatives with traumatic stories of the Partition, but also takes in the shiny new India of state-of-the-art technology and glittering Bollywood. In Bombay, Sanjeev attends a billionaire's party worthy of James Bond, while grinding poverty is a stone's throw away. In Jaipur, he wryly observes the polo-playing Maharajah jet-set, and sees the Ganges lit up by a million candles during the festival of Dawali.

His trip sometimes gets a little surreal, as Sanjeev finds himself judging the world's strangest beauty pageant – Mrs India – or plays a sleazy uncle in a Bollywood blockbuster. But we also travel with him to the spiritual heartland of India – Rishikesh, where hippy throwbacks mingle with monks in saffron-coloured robes on the banks of the holy river.

In Sanjeev we have the perfect witty and thoughtful travelling companion with a unique take on a remarkable country – an India steeped in history on the brink of superpower status, chaotic and confusing, astonishing and jaw-droppingly beautiful.