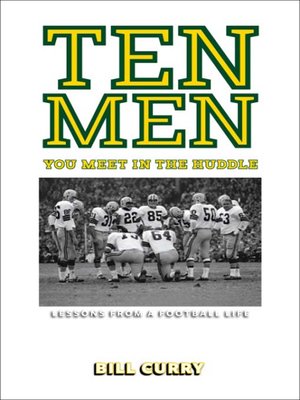 Ten Men You Meet in the Huddle

Lessons from a Football Life

Biography & AutobiographySelf-ImprovementSports & RecreationsNonfiction
No sport rivals football for building character. In the scorching heat of two-a-days and the fierce combat of the gridiron, true leaders are born. Just ask Bill Curry, whose credentials for exploring the relationship between football and leadership include two Super Bowl rings and the distinction of having snapped footballs to Bart Starr and Johnny Unitas.

In Ten Men You Meet in the Huddle, Curry shares the wit, wisdom, and tough love of teammates and coaches who turned him from a next-to-last NFL draft pick into a two-time Pro Bowler. Learning from such giants as Vince Lombardi and Don Shula, Ray Nitschke and Bubba Smith, Bobby Dodd and even the indomitable George Plimpton, Curry led a football life of nonstop exploration packed with adventure and surprise.

Blessed with irresistible characters, rich personal history, and a strong, simple, down-to-earth voice, Ten Men You Meet in the Huddle proves that football is much more than a game.
It's a metaphor for life.

A college football analyst for ESPN from 1997-2008, Bill Curry is the new head football coach at Georgia State University. Previously, he coached at Georgia Tech, Alabama, and Kentucky after completing a 10-year NFL playing career with the Packers...

More about Bill Curry
Ten Men You Meet in the Huddle
Copy and paste the code into your website.
New here? Learn how to read digital books for free