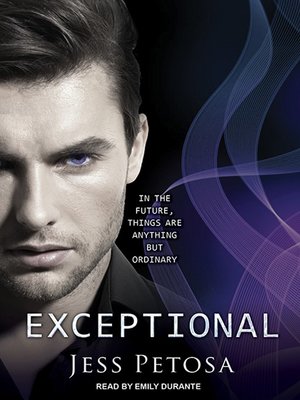 Science FictionScience Fiction & FantasyYoung Adult Fiction
In 2022, the United States commissioned a group of scientists to experiment with genetic mutations. Their goal was to create a serum that would alter the human genetic code, making the subject stronger and faster. But not only had they created a super serum, but also an airborne virus. By 2025, seventy-five percent of the world's population had perished. Ally is an Ordinary-a human who is immune to the virus. She lives in a settlement outside the City with her mother and twin brother, but lately it doesn't seem to be enough. She is wrestling between being with her family and volunteering to move to the City, where she can work for the Exceptionals. Luke is an Exceptional, a superior human being. His ancestors were infected with the virus and lived through it, leaving their super human strength and special abilities to him. He has never given much thought to Ordinarys, despite pressure from his father to choose one from the ORC. But all of that changes when he meets Ally . . .
Science FictionScience Fiction & FantasyYoung Adult Fiction

Jess Petosa is a Philly girl transplanted to the middle of Amish Indiana. Somewhere in between chasing two toddlers and meeting her one hundred books a year reading goal, she writes young adult fiction. She is the author of the novel Forget Me. Sh...

More about Jess Petosa
Exceptional Series, Book 1
Copy and paste the code into your website.
New here? Learn how to read digital books for free