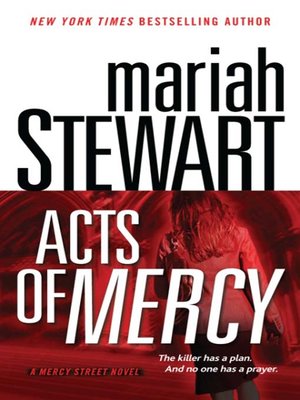 FictionRomanceSuspenseThriller
From New York Times bestselling author Mariah Stewart comes a novel of sexy romantic suspense for fans of Nora Roberts, Catherine Coulter, and Karen Robards.
Former FBI agent Sam Delvecchio brings the keen skills of a profiler to his new position as a Mercy Street Foundation operative–and not a moment too soon. His first assignment, the cold-case murder of a local soup kitchen volunteer, has all the telltale signs of a serial killer's work. That grim suspicion is confirmed when FBI agent Fiona Summers shares the details of two other killings with eerie similarities to Sam's case: The bodies in all three cases have been carefully posed. And when a fourth victim is discovered, the two investigators realize they're pursuing the same twisted quarry.
Local parish priest Kevin Burch, Mercy Street founder Robert Magellan's cousin, recognizes the posings for what they are: The killer is staging the church' s seven Acts of Mercy ("Feed the hungry, clothe the naked . . .") with the bodies of his victims. But as Sam and Fiona race to prevent the final three murders, taunting messages from their target lead to the most chilling realization of all.
FictionRomanceSuspenseThriller

More about Mariah Stewart
Acts of Mercy
Copy and paste the code into your website.
New here? Learn how to read digital books for free