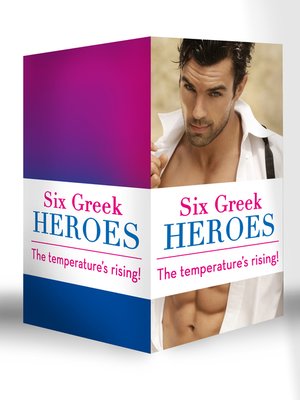 FictionRomanceShort Stories
SIX GREEK HEROES Six gorgeous Greek alpha males to fall in love with! Six fantastic Modern Romances. THE GREEK TYCOON'S CONVENIENT MISTRESS by Lynne Graham Andreas Nicoladis never keeps a mistress long - until Hope enters his life. Hope wants more than a fling from the man she loves, so leaves. Then she discovers she's pregnant with his child! THE GREEK'S INNOCENT VIRGIN by Lucy MonroeGreek tycoon Sebastian Kouros thinks Rachel Long is a scheming money-grabber who deserves nothing from him or his family. But the searing sexual chemistry between them can't be denied. Sebastian sees an opportunity to seduce this girl who plays it so sweet and innocent. He'll discard her when he sees fit... Only Rachel isn't a gold digger at all –and she's a virgin! THE GREEK'S FORBIDDEN BRIDE by Cathy WilliamsTheo Toyas is suspicious of the beautiful but beguiling Abby Clinton. He's convinced that her air of vulnerability conceals a devious woman intent on snatching the Toyas fortune. And he's going to seduce her into telling the truth. THE GREEK'S BOUGHT WIFE by Helen BianchinNic Leandros knows that most people want only his money. So when he finds out beautiful Tina Matheson is pregnant with his late brother's child, he's certain her price will be high... However, Tina must agree to his terms: no Leandros heir has ever been born out of wedlock; they will marry for the baby's sake... THE GREEK'S BRIDAL BARGAIN by Melanie Milburne She was the little rich girl, he was the poor housekeeper's son, and their innocent affair was cruelly crushed. But now Kane Kaproulias has Bryony Mercer in the palm of his hand... Kane will take her and his revenge on her family! He's waited a long time to get Bryony right where he wants her – in his bed, as his wife! THE ANTONIDES MARRIAGE DEAL by Anne McAllisterGreek magnate Elias Antonides has single-handedly regained his family's fortune. So when his father gambles away a vital share he's furious! Elias now has a new business partner...stunning heiress Tallie Savas. Elias has underestimated Tallie, and now wonders if he can make their business arrangement personal – as in marriage!If you have enjoyed these novels, look for more books like this in the Mills & Boon Modern Romance series.
FictionRomanceShort Stories

RITA Award-winner Anne McAllister was born in California and spent formative summer vacations on a small ranch in Colorado, where developed her concept of "the perfect hero", as well as a weakness for dark-haired, handsome lone-wolf type guys. She...

Helen Bianchin was encouraged by a friend to write her own romance novel and she hasn't stopped writing since! Helen's interests include a love of reading, going to the movies, and watching selected television programs. She also enjoys catching up...

Melanie Milburne read her first Harlequin at age seventeen in between studying for her final exams. After completing a Masters Degree in Education she decided to write a novel in between settling down to do a PhD. She became so hooked on writing r...

Six Greek Heroes
Copy and paste the code into your website.
New here? Learn how to read digital books for free