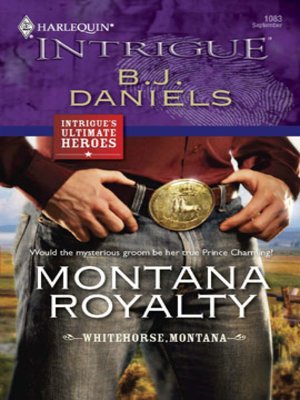 It was cold, they were trapped...and Rory Buchanan had made love to a perfect stranger--and enjoyed it way more than she should have. But how was a regular girl from Whitehorse supposed to know the royal protocol for dealing with a fantasy one-night stand?

It soon became clear that Devlin Barrow would slay any dragon for local girl Rory--a court full of nobles had even descended on the small Montana community. But this relationship was no fairy tale. Because someone was willing to kill to keep Devlin's secret past from toppling the royal hierarchy. And with Rory pregnant with his surprise heir, her life was at stake as well.

B.J. Daniels was born in Houston, Texas, to parents who loved to travel. The first time her father saw Montana, he sold their home in Houston and moved them to the Big Sky state.Her parents also loved to eat and brought Tex Mex and Texas barbecue ...

More about B.J. Daniels
Montana Royalty
Copy and paste the code into your website.
New here? Learn how to read digital books for free