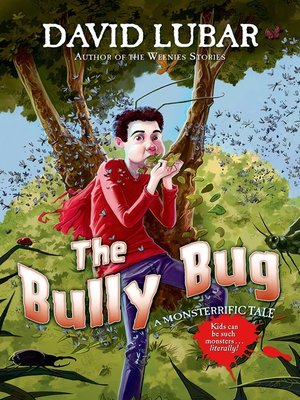 There's something strange going on at Washington Irving Elementary School. Kids are turning into monsters—literally!
Lud Mellon gets bitten by a bevy of bugs in his basement and the next thing he knows, he's crawling up walls, drooling on his food, and rolling around in garbage. Turning into a giant insect seems fun at first, almost like having superpowers. But when his dad calls in the exterminators, Lud has to figure out how to stop his transformation before he gets squashed like a bug.
"This book will talk itself right off the shelves, and reluctant readers will devour it."—School Library Journal on The Curse of the Campfire Weenies

David Lubar created a sensation with his debut novel, Hidden Talents, an ALA Best Book for Young Adults. Thousands of kids and educators across the country have voted Hidden Talents onto over twenty state lists. David is also the author of True Ta...

More about David Lubar
The Bully Bug
Copy and paste the code into your website.
New here? Learn how to read digital books for free