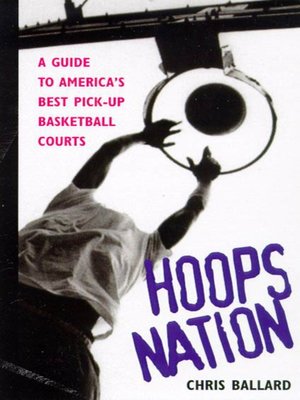 Find out where to play and what to expect in this street-smart and entertaining pick-up basketball bible, Hoops Nation.

For the millions of b-ball junkies who are not in the NBA or the WNBA, hoop dreams are lived out on playgrounds and in old gyms, in informal games that can be every bit as competitive as their big-league counterparts, no matter what the level of play. This is pick-up basketball, America's favorite way to play its favorite game.
Hoops Nation is the result of former college-basketball player Chris Ballard's six-month quest by van to find the best pick-up basketball games in the country. Entries from all forty-eight mainland states break down the key points of each game site, including level of play, number of hoops, playing surface, whether women play, average age of players, and whether night play is an option. Ballard also gives the entertaining lowdown on local basketball culture, lore, and etiquette. At-a-glance symbols for each court make for easy reference, and interspersed throughout are lively sections and sidebars on topics such as dunking technique, the pick-up court hall of fame, slang, and more.
From the Venice Beach courts of White Men Can't Jump, through hallowed heartland hoops, to the legendary rims rocked on New York City's West 4th Street, anyone who wants to lace up and play will find all they need to know about the court next door or across the country in Hoops Nation.