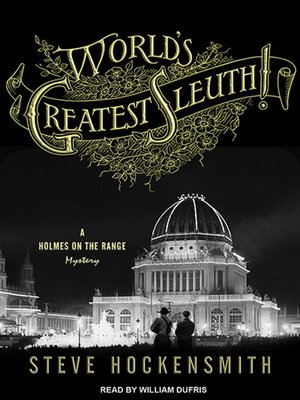 FictionLiteratureMysteryHistorical Fiction
In 1893, the Amlingmeyer boys venture forth from the west in response to a summons from Otto's ("Big Red") publisher-they are to come to Chicago immediately, to the World's Columbian Exposition, and compete with some of the most famous detectives in the world. Set to coincide with the closing days of the first World's Fair and the publication of the story revealing the death of Sherlock Holmes, Gustav ("Old Red") will be competing for the title of World's Greatest Sleuth! Hating train travel and cities, the real draw is the chance to meet up again with the intriguing and elusive Diana Corvus. But the competition has barely begun before there is a murder in "the White City"-the organizer of the contest is discovered face down in the Mammoth Cheese from Canada-and from there, the game is really afoot.
FictionLiteratureMysteryHistorical Fiction

Steve Hockensmith writes a monthly column for Alfred Hitchcock's Mystery Magazine, and he is the author of Holmes on the Range, an Edgar Award finalist and the beginning of his highly successful Holmes on the Range mystery series.

More about Steve Hockensmith
World's Greatest Sleuth!--A Holmes on the Range Mystery
Copy and paste the code into your website.
New here? Learn how to read digital books for free