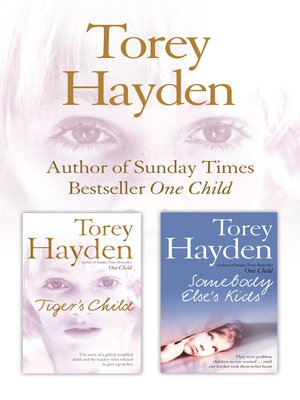 The Tiger's Child and Somebody Else's Kids 2-in-1 Collection

For the first time, bestsellers Somebody Else's Kids and The Tiger's Child are combined to show Hayden's extraordinary attempt to rescue the children that no one else wanted to help.

In Somebody Else's Kids, four problem children are placed in Torey Hayden's class because nobody knew what else to do with them. They were a motley group of kids in great pain: a small boy who echoed other people's words and repeated the weather forecast; a beautiful seven-year-old girl brain damaged by savage parental beatings; an angry ten-year-old who had watched his stepmother murder his father; and a shy twelve-year-old who had been cast out of Catholic school when she became pregnant. But they shared one thing in common: a remarkable teacher who would never stop caring -- and who would share with them the love and understanding they had never known to help them become a family.

In the Sunday Times best seller The Tiger's Child, Haydon attempts to reconnect with an abandoned teenager she helped as a child. Sheila, a gangly teenager with bright orange hair -- is no longer broken and lost, but still troubled and searching for answers. It is up to Hayden to once again answer the call to help a child in need.

More about Torey Hayden
The Tiger's Child and Somebody Else's Kids 2-in-1 Collection
Copy and paste the code into your website.
New here? Learn how to read digital books for free