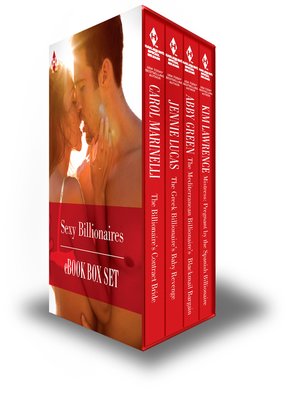 They're rich, ruthless and sinfully sexy! Be seduced by this collection of four passionate stories!

The Billionaire's Contract Bride by Carol Marinelli
Zavier Chambers is one of Australia's most powerful playboys, and to him, Tabitha Reece is just a golddigger --so why can't he get her out of his mind? Discovering Tabitha needs to marry for money he seizes his chance to get her exactly where he wants her--in his bed! And with the stakes so high, Tabitha is willing to play the game....

The Mediterranean Billionaire's Blackmail Bargain by Abby Green
Cynical, ruthless and dangerously seductive, Dante D'Aquanni has a reputation to uphold. When Alicia Parker turns up at his Lake Como villa with the press in tow, claiming he's responsible for her sister's pregnancy, he's furious. He knows her kind--and he'll make her pay, in any way he sees fit...!

The Greek Billionaire's Baby Revenge by Jennie Lucas
Anna made one mistake when working for Nikos Stavrakis: sharing his bed! Believing Nikos to be unfaithful, Anna left him, but nine months later, she is left nursing a tiny baby... Nikos is furious when he discovers Anna has his sonso he will make Anna his bride, and teach her who's boss!

Mistress: Pregnant by the Spanish Billionaire by Kim Lawrence
Library assistant Nell Frost is on a mission to confront the man who is nothing but a heartless seducer of women! But Nell has underestimated the power of Luiz Santoro... One look at this young virgin, dressed in shapeless clothes and this Spaniard makes a plan with two conditions: no marriage, no children. But rules are made to be broken...