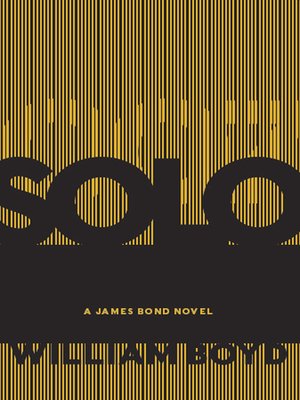 One of our most acclaimed authors takes on a legendary literary character, James Bond — producing a smart and stylish narrative of international espionage, conspiracy, and war

It's 1969, and, just having celebrated his 45th birthday, British agent James Bond — 007 — is summoned to headquarters to receive an unusual mission. Voltazia, a troubled West African nation, is being wracked by a bitter civil war, and M directs Bond to squash the rebel forces threatening the established regime. Bond senses that he's not getting the full story about Britain's interest in the outcome.

His landing in Voltazia begins a feverish mission to discover the forces behind this brutal war — and Bond realizes the situation is far from straightforward. The beautiful and brilliant Ellie Ogilvy-Grant, his intelligence liaison on the ground, seems to be Bond's best weapon — until the two are captured by rebel forces and her allegiances become unclear. Bond escapes and returns home alive, but as he pieces together the real story behind the violence in Voltazia, he knows his life is in danger. The conspiracy extends further than Bond ever imagined, and only by crossing the Atlantic can he connect the dots between a dying African military leader, British and American intelligence forces, and a humanitarian aid group whose intentions are far from innocent.

Moving from rebel battlefields in West Africa to the closed doors of intelligence offices in London and Washington, this novel is at once a gripping thriller, a tensely plotted story full of memorable characters and breathtaking twists, and a masterful study of power and how it's wielded — a brilliant addition to the James Bond canon.