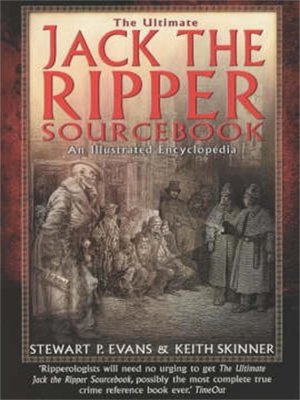 The Ultimate Jack the Ripper Sourcebook

True CrimeCrimeNonfiction
Two experienced Ripperologists have applied their joint knowledge and expertise to the painstaking collation of all the known official records to produce the ultimate Ripper book - a narrative account of the murders encompassing all the known evidence.The most complete work on the Ripper case ever, contains: the entire contents of the Scotland Yard files covering the full series of murders; extensive press reports; witness statements and extracts from police notebooks; documents missing from the official files and many rare photographs.The Ultimate Jack the Ripper Sourcebook is not only an invaluable reference, but is also a compelling account of the Victorian serial murderer whose identity remains one of criminology's greatest mysteries.
True CrimeCrimeNonfiction

Stewart Evans is a retired police officer who has made it his life's work to track down previously hidden or suppressed documentary evidence relating to Jack the Ripper. He is the co-author of The Lodger - The Arrest and The Escape of Jack the Rip...

Keith Skinner is a professional researcher and co-author of The Ripper Legacy, The Peasenhall Murder, The Jack the Ripper A to Z and The Official Encyclopedia of Scotland Yard. He lives in Twickenham.

More about Keith Skinner
The Ultimate Jack the Ripper Sourcebook
Copy and paste the code into your website.
New here? Learn how to read digital books for free