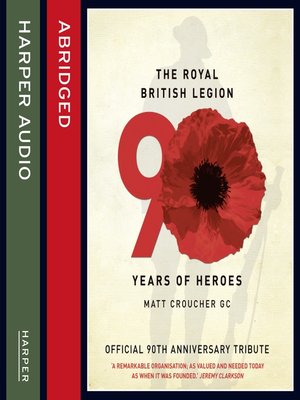 HistoryMilitaryNonfiction
The Royal British Legion was founded in 1921. It is now the country's leading charity providing financial, social and emotional support to those who have served or who are currently serving in the British Armed Forces and their dependants. The RBL is behind the annual Poppy Appeal, the highest profile charity appeal in Britain. This superbly illustrated book has the full support of the Royal British Legion and will tell the complete story of its history through exclusive access to its archives, thus providing a celebratory, as well informative, tribute to their work over the past 90 years. It will be the definitive history of this much-loved organisation, charting its work with soldiers and ex-servicemen through the stories of its heroes, famous as well as unknown, during the highest-profile military campaigns of the past 90 years. The book will be divided into nine chapters, each representing one decade in the RBL's existence. Each chapter will celebrate one hero per year; 1921, 1922, 1923, etc. giving an account of that particular person, and what they achieved. Within each chapter will be special spreads that emphasise also the social history of the evolution of the RBL as a charity, supported with iconic imagery and text. Each one of the heroes, from 1921 right through to 2011, has been personally chosen by decorated royal marine, and RBL ambassador, Lance Corporal Matt Croucher GC. Men such as Major Robert Henry Cain VC (1909-1974), who destroyed six tanks during Operation 'Market Garden' at Arnhem in 1944 and was one of the only officers from his battalion to escape the German encirclement of the British 1st Airborne Division. The book will be published in late autumn to coincide with the 2011 Poppy Appeal, which will be the biggest in the Legion's history, with events running nationwide, TV advertising, celebrity involvement and a high-profile marketing campaign. Matt Croucher will be involved in the campaign as an ambassador for the RBL. For any serving member of the armed forces, or those retired from service, or members of the public who are keen to know about this beloved organisation; this will be a fascinating and valued purchase, knowing that royalties will be going to the charity themselves.
HistoryMilitaryNonfiction

LANCE CORPORAL MATT CROUCHER GC grew up in Solihull and joined the Royal Marines aged 16, passing through the legendary 32-week training programme and into 40 Commando despite a series of injuries. He served two tours with the Marines in Iraq befo...

The Royal British Legion
Copy and paste the code into your website.
New here? Learn how to read digital books for free