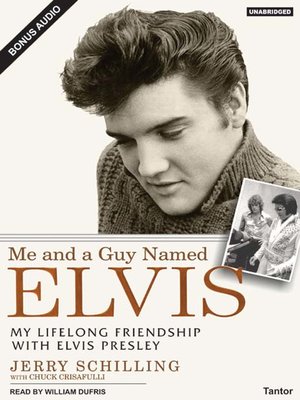 Me and a Guy Named Elvis

My Lifelong Friendship with Elvis Presley

Biography & AutobiographyMusicPerforming ArtsNonfiction
Ona lazy Sunday in 1954, twelve-year old Jerry Schilling wandered into a Memphis touch football game, only to discover that his team was quarterbacked by a nineteen-year old Elvis Presley, the local teenage whose first record, "That's All Right," had just debuted on Memphis radio. The two became fast friends, even as Elvis turned into the world's biggest star. In 1964, Elvis invited Jerry to work for him as part of his "Memphis Mafia," and Jerry soon found himself living with Elvis full-time in a Bel Air mansion and, later in his own room at Graceland. Over the next thirteen years Jerry would work for Elvis in various capacities-from bodyguard to photo double to co-executive producer on a karate film. But more than anything else he was Elvis's close friend and confidant: Elvis trusted Jerry with protecting his life when he received death threats, he asked Jerry to drive him and Pricilla to the hospital the day Lisa Marie was born and to accompany him during the famous "lost weekend" when he traveled to meet President Nixon at the White House. Me and a Guy Named Elvis looks at Presley from a friend's perspective, offering readers the man rather than the icon-including insights into the creative frustrations that lead to Elvis's abuse of prescription medicine and his tragic death. Jerry offers never-before-told stories about life inside Elvis's inner circle and an emotional recounting of the great times, hard times, and unique times he and Elvis shared. These vivid memories will be priceless to Elvis's millions of fans, and the compelling story will fascinate an even wider audience.
Biography & AutobiographyMusicPerforming ArtsNonfiction

William Dufris has been nominated nine times as a finalist for the APA's prestigious Audie Award and has garnered twenty-one Earphones Awards from AudioFile magazine, which also named him one of the Best Voices at the End of the Century.

Jerry Schilling has spent forty years in the entertainment industry as an actor, a film editor, producer, and a manager for such acts as the Beach Boys, Jerry Lee Lewis and Billy Joel.

More about Chuck Crisafulli
Me and a Guy Named Elvis
Copy and paste the code into your website.
New here? Learn how to read digital books for free