The Poetry of Amy Lowell 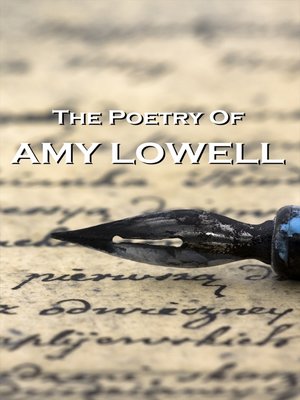 Poetry is a fascinating use of language. With almost a million words at its command it is not surprising that these Isles have produced some of the most beautiful, moving and descriptive verse through the centuries. In this series we look at individual poets who have shaped and influenced their craft and cement their place in our heritage. In this volume we look at the works of the American poet Amy Lowell. She was born into the prominent Lowell family in Brookline Massachusetts in 1874. Although her brother was to become President of Harvard she never entered college, her family considering it not proper for a woman. However she loved books and was an avid reader and collector. A socialite she travelled widely and first began to publish in 1910. Thought to be a lesbian the erotic themes within several of her poems are a wonderful loving tribute to that side of her. She published other poets and was working on a biography of the poet John Keats which brought forth the wonderful line "The stigma of oddness is the price a myopic world always exacts of genius. In becoming a major figure in the Imagist movement she clashed with Erza Pound frequently. In 1925 she died of a cerebral haemorrhage at the age of 51. The following year, she won the Pulitzer Prize for Poetry for What's O'Clock. The full volume can be purchased from iTunes, Amazon and other digital stores. Among our readers are Richard Mitchley and Ghizela Rowe.