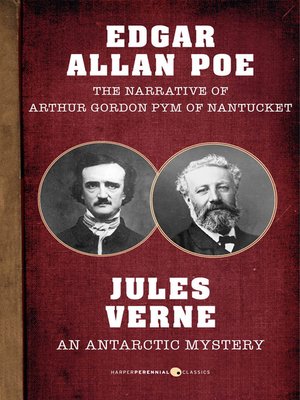 Edgar Allan Poe' s The Narrative of Arthur Gordon Pym of Nantucket is the story of young Arthur Gordon Pym who, yearning for adventure, stows away on the whaler Grampus. Beset by troubles including mutiny, shipwreck, and cannibals, Pym is rescued by the crew of the Jane Guy and continues his adventures as the ship heads further south.

Eleven years later, Jules Verne' s An Antarctic Mystery picks up the trail of Pym and his fellow shipmates, taking readers to the very edge of the world, where the mystery of Arthur Gordon Pym' s fate is eventually revealed.

Jules Verne (1828-1905) used a combination of scientific facts and his imagination to take readers on extraordinary imaginative journeys to fantastic places. In such books as Around the World in Eighty Days, From the Earth to the Moon, and Jour...

More about Edgar Allan Poe
The Narrative of Arthur Gordon Pym of Nantucket and an Antarctic Mystery
Copy and paste the code into your website.
New here? Learn how to read digital books for free