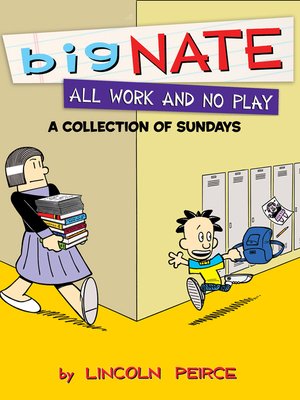 Big Nate All Work and No Play

Already a New York Times best-seller, it's two firsts in one for a Big Nate book! The first Sundays-only and first full-color Big Nate collection both debut in Big Nate All Work and No Play. Enjoy more than two years of Sunday cartoons, portraying the colorful life of Nate Wright. This spunky eleven-year-old holds the school record for detentions and is in little chance of losing that distinction, but that doesn't stop him from dreaming big!

He's a self-described genius, a sixth-grade renaissance man, and a full-fledged believer in his future as a cartoonist. Equipped with a No. 2 pencil and the unshakable belief that he is No. 1, Nate fights a daily battle against overzealous teachers, undercooked cafeteria food, and all-around conventionality.

Lincoln Peirce has been drawing the Big Nate comic strip for 20 years. Born in Ames, Iowa, Peirce grew up in Durham, New Hampshire. As a kid, he began creating his own strips in the sixth grade. Peirce taught high school in New York City and has c...

More about Lincoln Peirce
Big Nate All Work and No Play
Copy and paste the code into your website.
New here? Learn how to read digital books for free