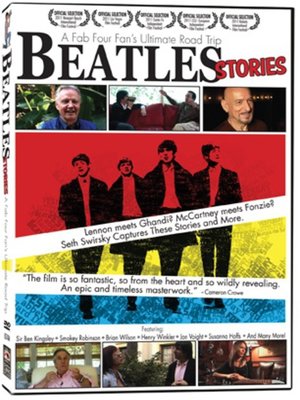 Songwriter Seth Swirsky grew up in the 1960s loving the Beatles — their songs, their sound and their style. In 2004, he set out, video camera in hand, to talk to people who had crossed paths with his heroes.From Sir Ben Kingsley to Sir George Martin; from Beach Boy Brian Wilson to astronomer Brian Skiff, Seth filmed hundreds of personal recollections from people that knew them or those that just had an unforgettable encounter with them.

The result is Beatles Stories – A Fab Four Fan's Ultimate Road Trip. Chosen as an Official Selection in many prestigious international film festivals, the movie has been delighting audiences the world over.

Wherever you are on the spectrum of Beatles fan – from passionate to casual – you'll love Beatles Stories. As the group themselves might say, "A splendid time is guaranteed for all!"